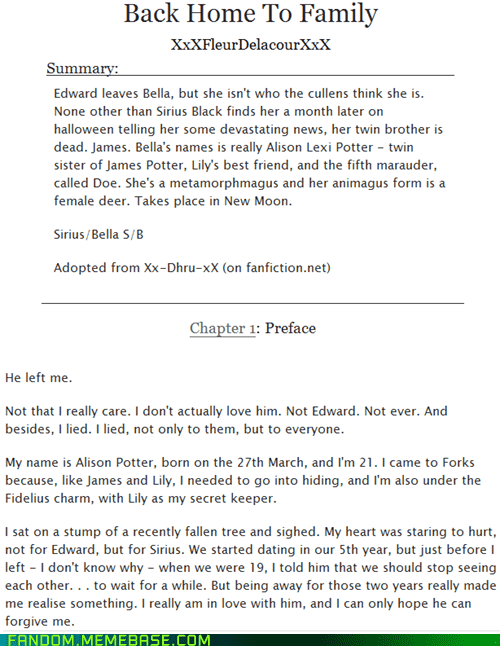 On the bright side, Bella/Alison doesn't spend the entire story in tears, bleating like a goat because Edward left her. She's also apparently merely pretending to be in high school, making Edward a tiny bit less of a pedobear for liking her in the first place. However, she's just as irritatingly sad and swoony over Sirius as the real Bella is over Edward. Oh, and New Moon is set at the same time Harry Potter's parents are killed? WAT. I can't even. My mind is going numb. Send help.

This week's BFF is so bad that I had reservations about posting it. I can't imagine it's anything but a trollfic, and though I've read it three times, I have no idea what's going on. Rory's marrying River, but she's a dog? Rose is part timelord?

In case you aren't up to date on your Canadian politicians, Stephen Harper is Canada's Prime Minister, and Justin Trudeau is a Member of Parliament (and in the author's defense, he is rather cute for a politician).

As usual, there's a link to the full masterpiece in the Via below. 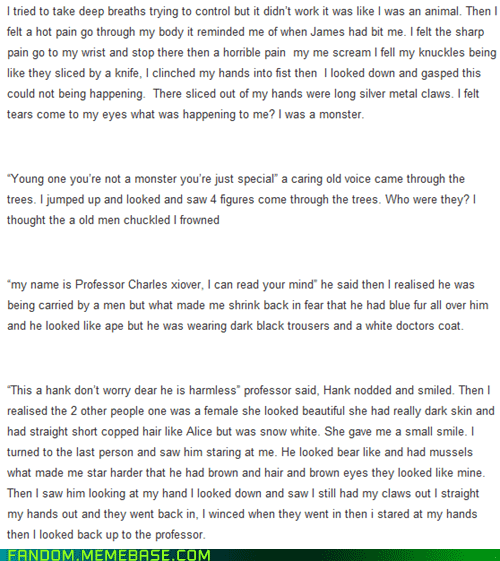 What, what, what are you doing, Readerwritergirl12?! How dare you soil X-Men with Twilight! Though, in the author's defense, the glittering vampire thing could just be a really terrible mutation. I'd buy that. I mean, it's no worse than being Jubilee, right? 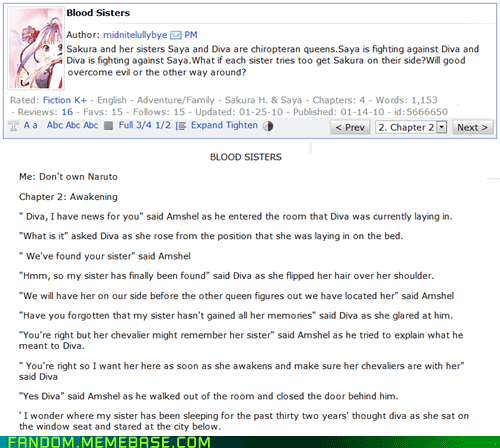 By Overshadowed_Medallion (Via fanfiction.net)
Repost
Recaption

From the Submitter: I somehow managed to force myself through the sole two chapters. My eyes nearly bled out of my skull. Especially at the blatant misspellings of the names of Kai and Hagi. I cringe when reading the last post, becuase she threatens to crossover Bleach and Twilight... Dear God, NO! 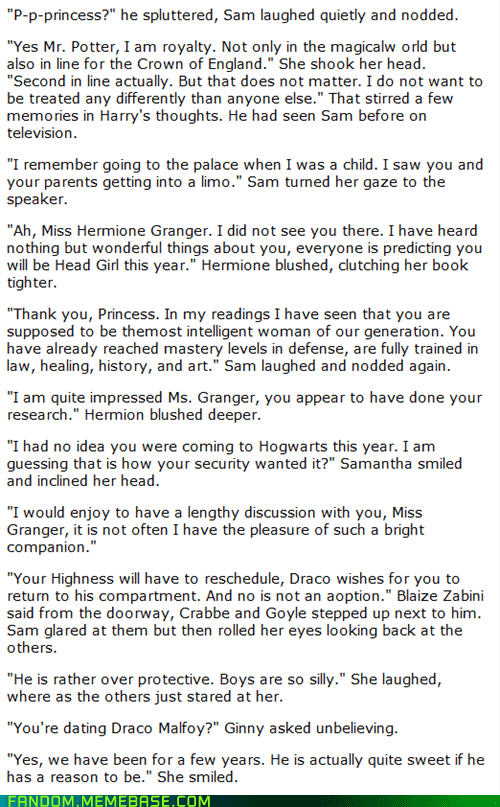 From the Submitter: Her name is Samantha SilverMoon. Just saying.

MARY SUE ALERT! A princess has entered the story.

Lando Calrissian and Ronald Reagan versus Commies on the moon? Yes, please!

Bad Fanfic (Sorta) Friday: Why Can't I Stop Watching This Rebuild of the End of Evangelion Episode 2?

Bad Fanfic Friday: "What do you expect" 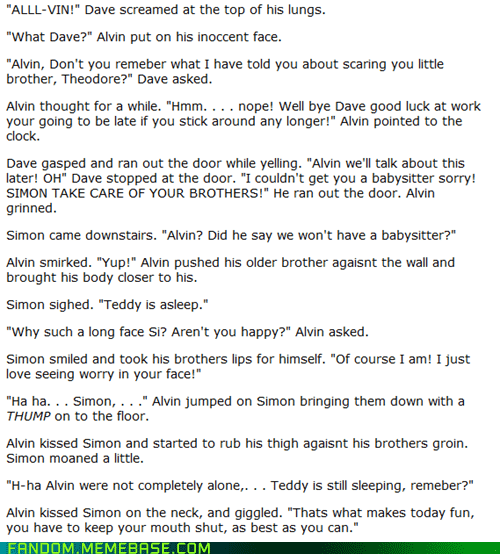 Oh god, why? Warning: the full story is not safe for life.

P.S. Want to share your bad fanfiction with us? All you have to do is upload a screencap with a link to the full story! My bulk-sized bottle of eye bleach is just sitting here, waiting for your submissions. 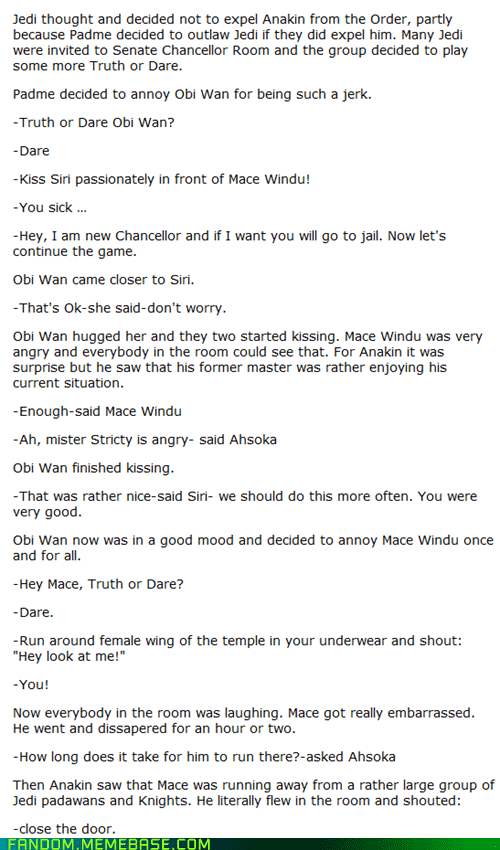 Mace Windu playing truth or dare?! THE HORROR. If this is what downtime is like in the Star Wars universe, I take it back; I don't want to live in that galaxy anymore. 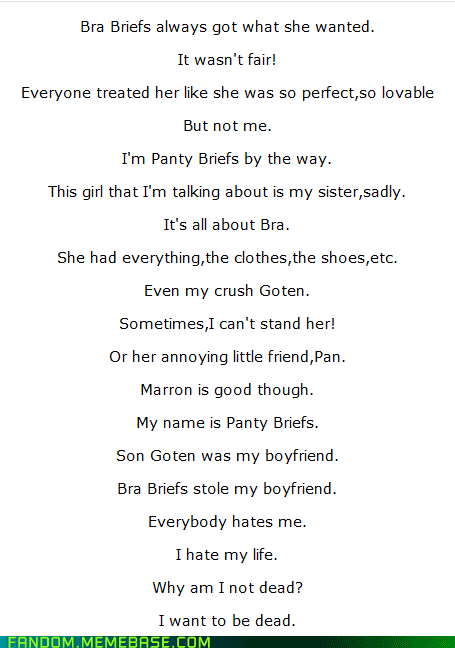 By Katherine (Via fanfiction.net)
Repost
Recaption

Panty Briefs? What a name! Speaking of names, there's a chapter called "The party, and Evanescence." Why wouldn't you want to read a Dragon Ball Z fic with a chapter like that?

Bad Fanfic Friday: Mass Effect: The War is My Shepard

I'm calling trollfic on this one, but that's okay because "Saren blow up. And Saren dies."

Can't Tell if Bad Fanfic Friday: Caring for His Eggs 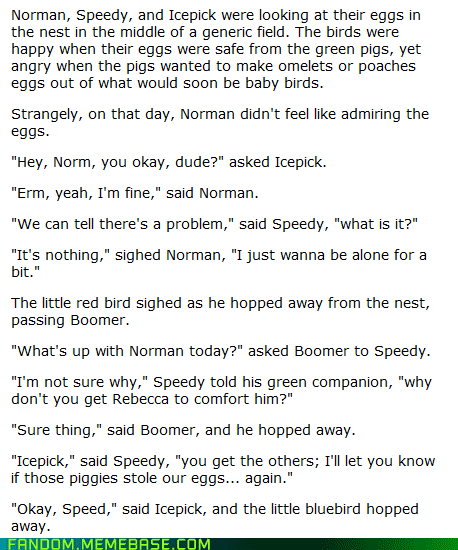 I really don't know what to make of this Angry Birds fanfic, so I'm just gonna let you decide: bad fanfic or fancy fanfic? I will say though, I'm not sure I want to play Angry Birds after this. Link to the full story in the Via below. 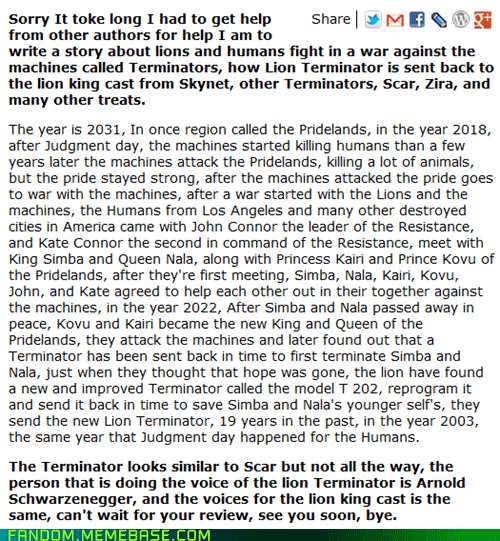 Oh no, this is not some kind of preface; this is the first chapter. How could you NOT want to read a story that features a terminator who "looks similar to Scar but not all the way" (whatever that means)? 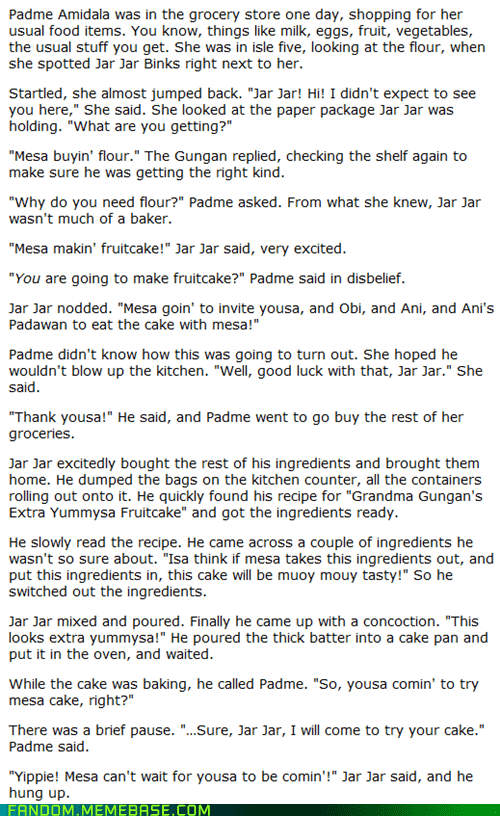 May the fourth be with you, Fandom! I know what you're thinking; "fruitcake" must be code for something, this has got to be going down a weird and horrible path I can't follow (+10 internets if you see what I did there). Unfortunately, this story is just as advertised: Jar Jar Binks bakes a fruitcake and it's extra yummysa, even to Anakin, who is normally not a fan of fruitcake. Sadly, there's no recipe for "Grandma Gungan's Extra Yummysa Fruitcake," but there is a link to the full story in the Via below.

Happy Star Wars Day! Honor the Jedi within by checking out our Star Wars-themed Cheezburger site! 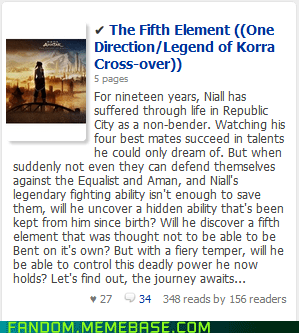 By WangFire (Via Quotev)
Repost
Recaption

Now, I don't know much about One Direction, but if you ask me, this story has potential. Loads of potential. More potential than I have eye-bleach. Tenzin should be ashamed of himself for fathering a member of One Direction.

Are You Sure You Aren't Part Zebra?