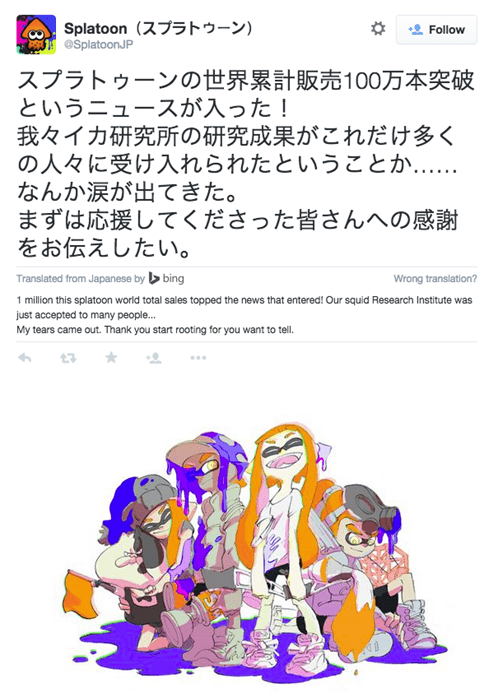 Are you playing Splatoon? If so, you're among one million players worldwide.

Splatoon isn't even out yet, and it's already becoming infamous. Players in the Global Testfire over the weekend found out just how brutal the multiplayer can be, specifically the game's paint roller weapon:

Splatoon multiplayer in one gif pic.twitter.com/H14ROfaEMQ

But what's the single player campaign like? Early looks suggest it's more robust than I expected. Players traverse through unique levels and face different challenges like using ink geysers and navigating moving platforms. The structure of the single player levels is being compared to Mario Galaxy, at least in terms of layout.

Boss battles match what you'd expect from a Nintendo game, and look like they put the game's core mechanic, ink, into play beautifully.

Have you played any of Splatoon yet? Are you excited for the game?

Nintendo announced a free demo and an online test this weekend.  Download the demo in the eShop, and hop online during one of three hour long tests:

If you aren't sure what Splatoon is bringing to the table, this is the perfect chance to see for yourself.

It's Always Sunny in Seaquestria

It's Normal to Cry When Cutting Onions

Marvel Meets the NFL In This Series of Helmets