It's now even more enhanced!

Check Out The Second Teaser For Star Wars: The Force Awakens 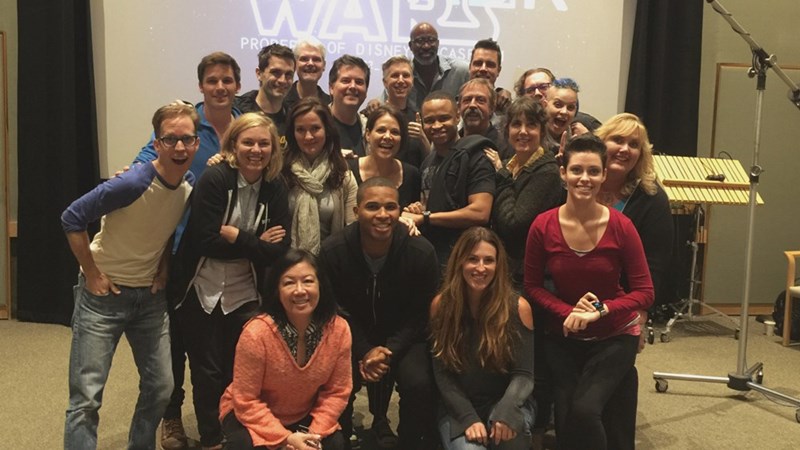 Matthew Wood, supervising sound editor for Star Wars: The Force Awakens has just written a long, detailed list of the voices in the background of the latest Star Wars movie. He writes:

Part of Skywalker Sound’s and John Williams’ job is to complement the visuals ofStar Wars and enhance the storytelling with a rich audio soundtrack. Just as our sound designers have to create sound effects for new weapons, vehicles, and ambiences, the dialogue department will turn to voice actors to populate these new worlds. And so it was with The Force Awakens.

You may have seen a section in the credits of The Force Awakens titled “Additional Voices,” with some familiar names listed. But who or what did all those familiar names play? I’m happy to finally reveal everyone below, running through the film chronologically.

It seems like a thankless job that is pretty important to making the world of the movie seem real. Notable examples of voice contributions include:

And of course, the Kevin Smith cameo you've probably heard about by now:

Stormtrooper (reacts to incoming Resistance fighters): “We have incoming at 28.6! Move!” — Kevin Smith

JJ Abrams catches a lot of flak for his (over)use of lens flares. So it was only fitting that the recently released Star Wars Episode VII teaser trailer get a flaring of its own.

Internet hero Mr Sunday Movies has accumulated all the deleted scenes and concept art he could get his hands on. Now, fans a better idea of how The Force Awakens became the blockbuster George Lucas is so bitter about.

The deleted scenes from Star Wars: The Force Awakens extend beyond what was left on the cutting room floor and go back as far as 2012 when the filmmaking process began. That means there's a whole lot of unused concept art, two scrapped versions including one by George Lucas and of course what was filmed but didn't make it into the final film (spoilers).
With Disney's acquisition of Lucasfilm towards the end of 2012 a number of artists were given the go ahead to create a set of guided imagery that served to get the creative juices flowing. Many of these images can be found in the hard cover book, The Art Of Star Wars The Force Awakens and include a proto Finn and Rey, the first lightsabers and a pony tailed Luke Skywalker looking trapped and forlorn.
With Michael Arndt given script writing duties the story began to take shape including the idea that part of the story revolved around searching through the underwater wreckage of the second Death Star in order to find the location of the hidden Jedi temples. Some elements did carry over into the final product, but for the most part Arndt's Luke Skywalker heavy script was scrapped in favour JJ. Abrams' and Lawrence Kasdan's vision.
From here on out the movie we saw is pretty much what they came up with, that being said a number of deleted scenes and concepts were left on the cutting room floor including Vader's helmet being the mcguffin, Han Solo not being dead, a Jedi killer being the main antagonist and a sith imposter claiming to be Anakin Skywalker himself. Speaking of there was the intention of having a Anakin/Vader hybrid ghost appear in the film which never panned out. All this and more is highlight in the video above, so check it out! Or don't. It's all good.

Beep Boop Beep! This DIY Will Help You Turn Your Old VW Bus Into R2D2!