A Fan Petition Hopes to See Robin Williams Immortalized in the Legend of Zelda, Too 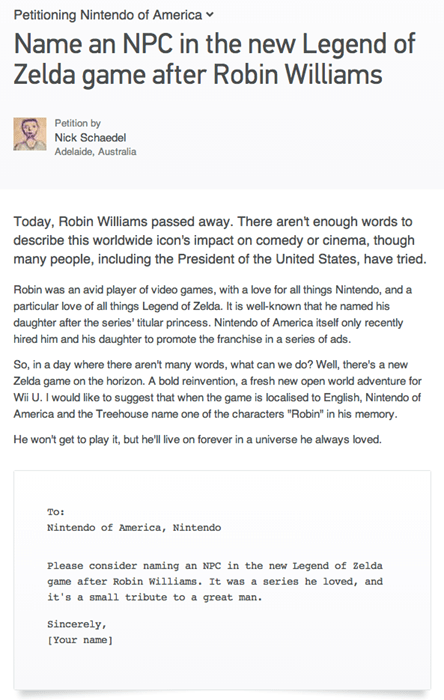 In response to the change.org petition pictured above, a Nintendo spokesperson said, "Robin Williams was loved at Nintendo. Our hearts go out to his entire family, and especially to Zelda Williams who we've worked with multiple times. We appreciate the outpouring of support from the gaming community, and hear the request of fans to honor him in a future game. We will not be discussing what might be possible for future games during this difficult time, but we will hold our memories of Robin close."

This petition comes on the heels of another fan petition that successfully got World of Warcraft to consider making Mr. Williams an NPC in the game.

Here is Robin Williams in World of Warcraft

Via AdriaCraft
Repost
Recaption
Comments
The Daily What
Favorite

That Robin Williams Impressionist Forms a Fellowship of the Rings

This guy got a lot of love last month when the internet found his cache of great impressions inspired by the late actor.