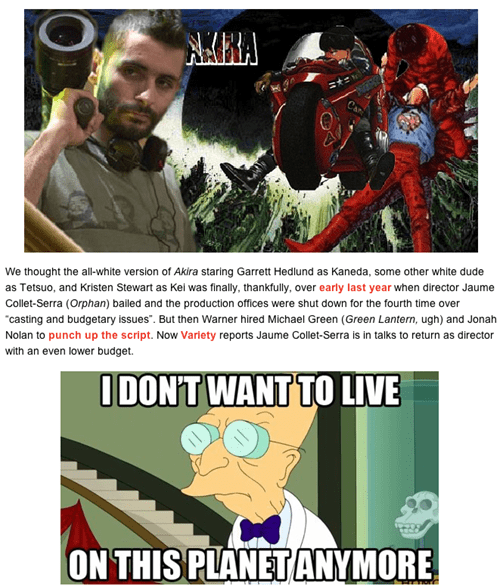 If Live Action Zelda Looks Anything Like This, I'm In

No, this is not the recently announced Netflix live action Zelda, it's a teaser for a short fan-film called The Final Battle, a collaboration between the Zelda Project and Player Piano.

Encountering Espurr is the Scariest Thing Ever

Disney is Making a Live Action Winnie the Pooh, Too

Not satisfied with turning every Disney princess ever into a live action film star, Disney is now going after the animals!  Deadline reports that Disney is working on a live action adaptation of children's classic Winnie the Pooh.  Relative unknown writer-director Alex Ross Perry has been hired on for the film, which will focus on an adult Christopher Robin returning to the Hundred Acre Wood.  I imagine it'll be like that time a grizzly ate a GoPro, pictured above.

The Rock's Bambi reboot is also looking more and more real with every passing day.

If there aren't singing orangutans in this movie, the whole thing is a bust.

Disney continues its foray into live action remakes with the newly released trailer for next year's version of The Jungle Book.

It's got some really big voice acting names to it, a kid that looks a heck of a lot like Mowgli and some pounding drums in the soundtrack. So that's something. At the very least, it looks better than the 1994 Jason Scott Lee version.

For whatever reason, Disney has recently decided to go back its well of immortal cartoons and remake them with live action. It's a strategy they appear to be doubling down on, because it seems like that's a phrase some Disney exec would have used when talking about this strategy.

The first of these remakes was this years Cinderella. Next will come this probably-songless remake of Jungle Book. Then for 2017, Disney is already working on a live action Beauty and the Beast. And last July, they announced they would work on a live action, Tim Burton remake of Dumbo.

You could probably thrown this year's Maleficent in with the bunch, but we're mostly talking about specific remakes rather than reimaginings. The world is full of complications.

But for now, we can just sit back and imagine what Christopher Walken will sound like as King Louie. Because that's probably going to be the best part.

Are you excited for The Jungle Book or any of these live action remakes?

Check out the Kickstarter here!

Literary Memes Bookworms Can Relate To