To commemorate the legendary Leonard Nimoy, the original Mr. Spock, the Star Trek family (from all generations) have taken to Twitter. Here are there thoughts and feelings. 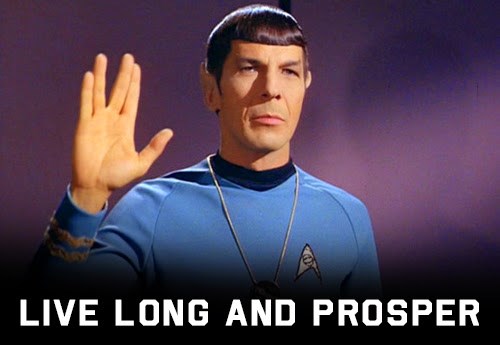 One To Beam Aboard: Leonard Nimoy Dies at 83 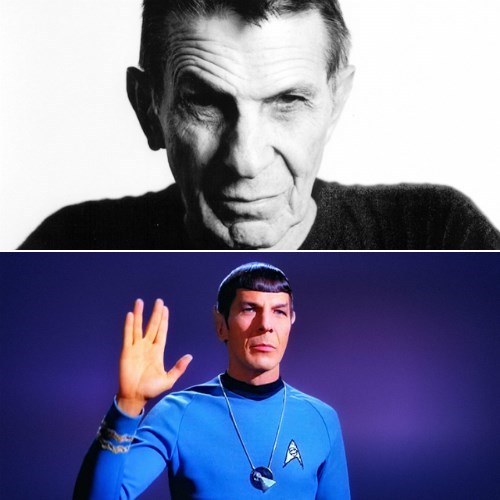 A hard-working character actor, thriving through television's infancy, Nimoy excelled at playing the outsider, or mysterious loner, a common archetype in early westerns. In 1966 he was offered the role of a different kind of outsider, a role that would forever launch him into media iconography, Star Trek's only regular alien, the Vulcan, Mr. Spock.

After a three year run on the bridge of the Enterprise, using Gene Roddenberry's imagined utopia to explore the complex social issues of race, gender, and morality in 1960's America, Star Trek was canceled. Ten years later, after a cult group of fans called Trekkies (or Trekkers) coalesced around the series, Nimoy would return as Spock. This time, on the silver screen.

After eight films, Spock along with the original Enterprise crew would retire from the franchise, but not for long. In 2009, when J.J. Abrams re-booted the original Star Trek crew, Leonard Nimoy would reprise his role as the Vulcan. Being the only veteran actor from the franchise to appear in the new series, Nimoy would go on to make an appearance in it's sequel Star Trek Into Darkness.

While Nimoy wasn't always happy being pigeon-holed as Spock, there was something of himself in the character. Feeling nearly ten years after the series wrapped,

To this day, I sense Vulcan speech patterns, Vulcan social attitudes and even Vulcan patterns of logic and emotional suppression in my behavior

Trekkies world-wide will mourn the loss of Leonard Nimoy and lament, that he has been, and always shall be, our friend.
Comments
Advertisement
Geek Universe
Favorite

Welcome to the Head Museum 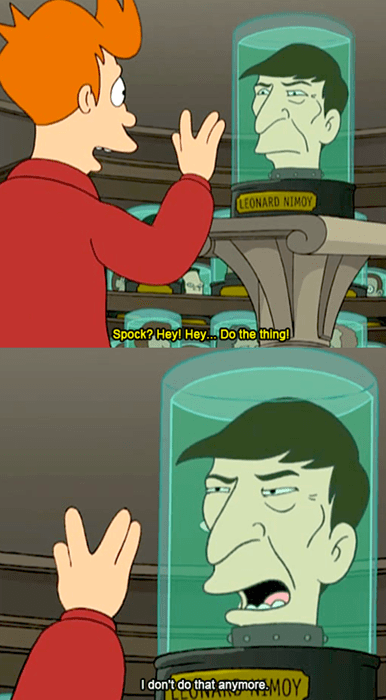 It's with a heavy heart that we say goodbye to SciFi legend Leonard Nimoy, whom we lost today after a battle with chromic obstructive pulmonary disease.

He touched many lives with his talent, and we'd love for you to share your favorite moments and memories of Leonard Nimoy in the comments below.

Tribute of the Day: Cast and Crew of Star Trek Beyond Remember Leonard Nimoy Through Charity

While filming the highly anticipated Star Trek Beyond the crew members of the Starship Enterprise decided to remember Leonard Nimoy.

It's a part of the Star Trek: To Boldly Go campaign, which has been raising money through Omaze for global causes chosen by the cast over the past month. In the final week, the cast decided to focus on one charity close to the late Mr. Nimoy's heart: The St. Jude's Children's Hospital.

The description of the video tells more:

Zachary Quinto, the cast and crew of Star Trek Beyond honor the legacy of the late great Leonard Nimoy by spotlighting a charity near and dear to the actor's heart.

In addition to the grand prize of a walk-on role in Star Trek Beyond, each week we're randomly selecting an additional winner to join the To Boldly Go Crew. The members of this honorary crew will visit the set, hang with the cast, and watch as they film scenes from the new film.

Every $10 entry supports nine global organizations each nominated by members of the cast. Check out other once-in-a-lifetime experiences at omaze.com.

It's a sweet tribute, especially coming from Quinto, the heir to the Vulcan ears. And surely, we can never remember the life of Leonard Nimoy enough.

Do Right by Spock, Children 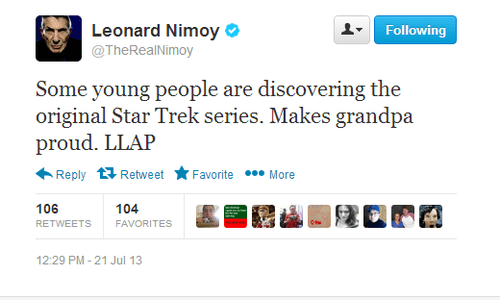 Leonard Nimoy's Last Tweet Imparts the Perfect Words to Live By, Though It Might Break Your Heart 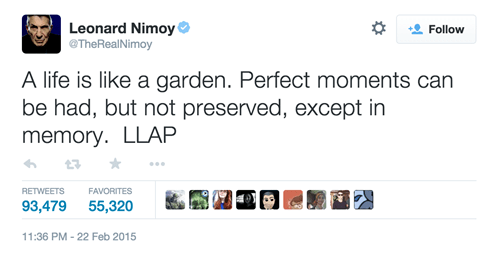 Canadians and Trekkies have been “Spocking” their five-dollar bills for years, but since Leonard Nimoy’s death there’s a been a surge in people sharing the defaced bills online to pay tribute.

There’s a community on Facebook called “SpockingYourFives” which explains the origins which is says are “shrouded in secrecy.”

Many years ago, some clever individual whos name has no doubt been forgotten in the annals of time noticed that Sir Wilfrid Laurier’s portrait on the Canadian five-dollar bill looked remarkably like a certain famous Vulcan. And thus the Spock five was born. With the advent of the new Canadian five-dollar bill, Laurier looks even more like Leonard Nimoy, ensuring the Spock five has a long and prosperous future.

With the increased attention towards “Spocking,” the Bank of Canada has come out saying that the practice is actually perfectly legal, but they still don’t want you to do it.

“The Bank of Canada feels that writing and markings on bank notes are inappropriate as they are a symbol of our country and a source of national pride,” bank spokeswoman Josianne Menard told theCBC.

And the defacing of the Canadian $5 bill warms my heart

Would You Watch Your Anime?