By DESTRUCTIONATOR (Via 2Snacks)
Repost
Recaption

2snacks has been gone for a bit but it was definitely worth the wait.

By Vast (Via NDAnimations)
Repost
Recaption

Since the actual one isn't finished, here's some Russian's version. (be sure to click for subtitles)

Y'all better not ignore this one.

You can't tell me what to do!
No wait, I already featured it. Dangit. 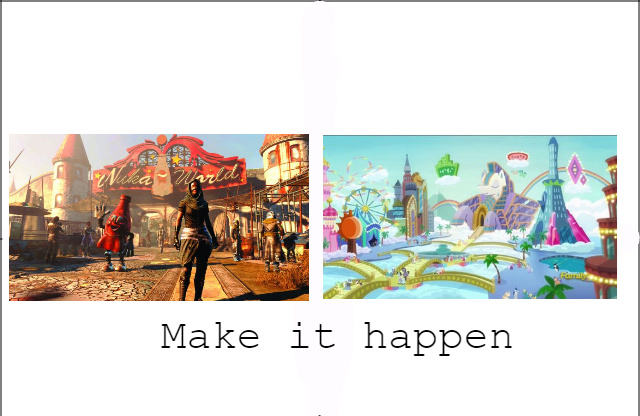 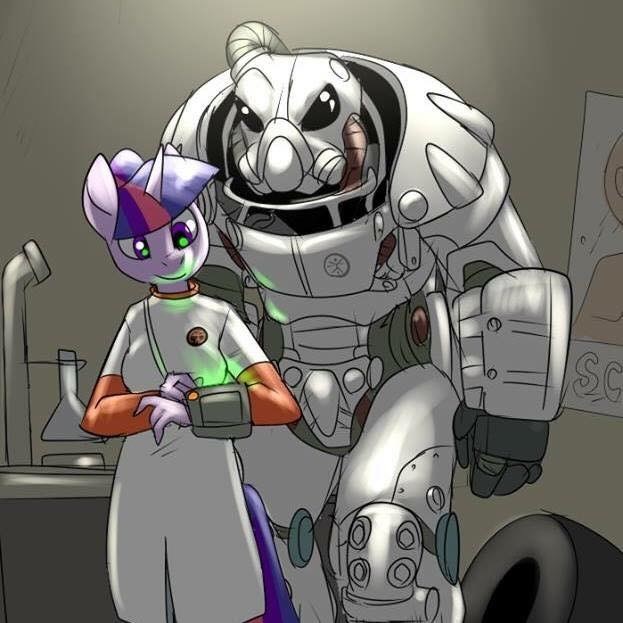 The Changeling Blade (NOT A MOD) 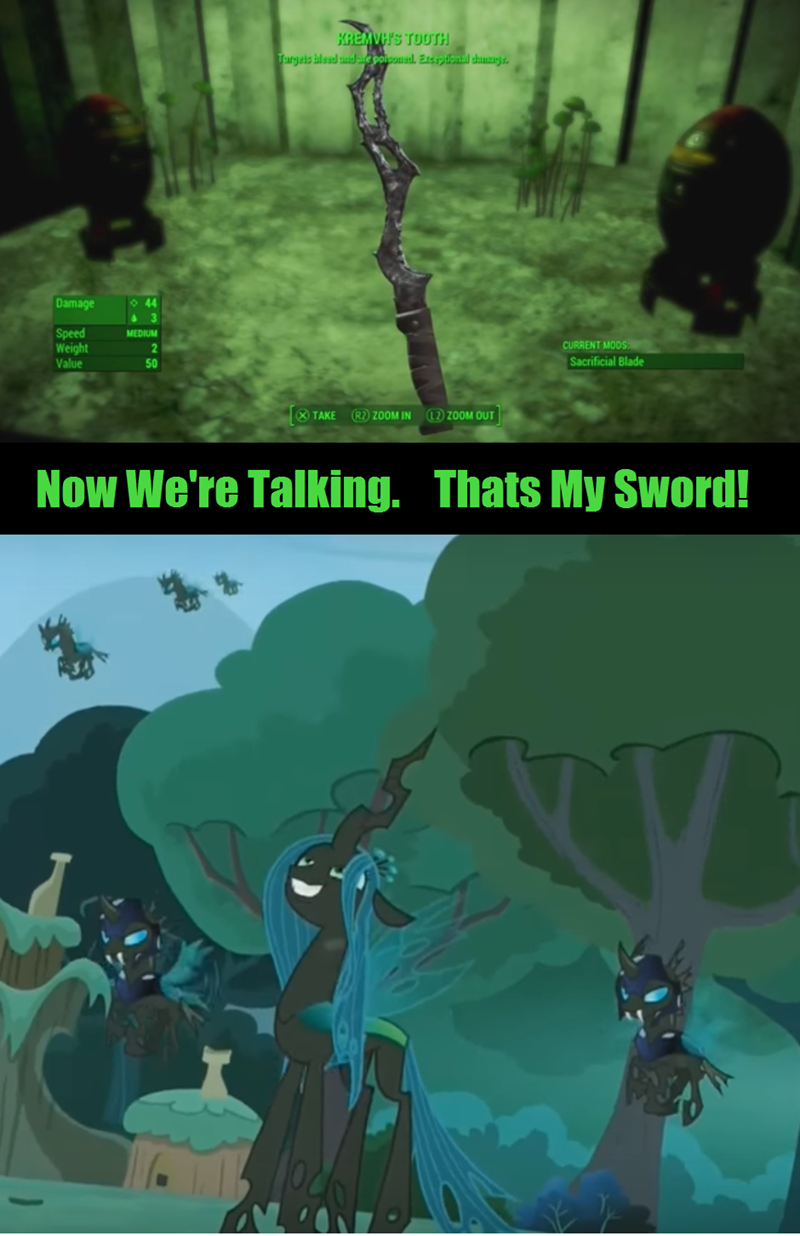 So this sword is hidden in Fallout 4. Its not a mod and its shaped like Queen Chrysalis' horn. It even has holes in it!

You can actually make any machete look like that by applying Sacrificial Blade to it at a workbench. But this one has poison. 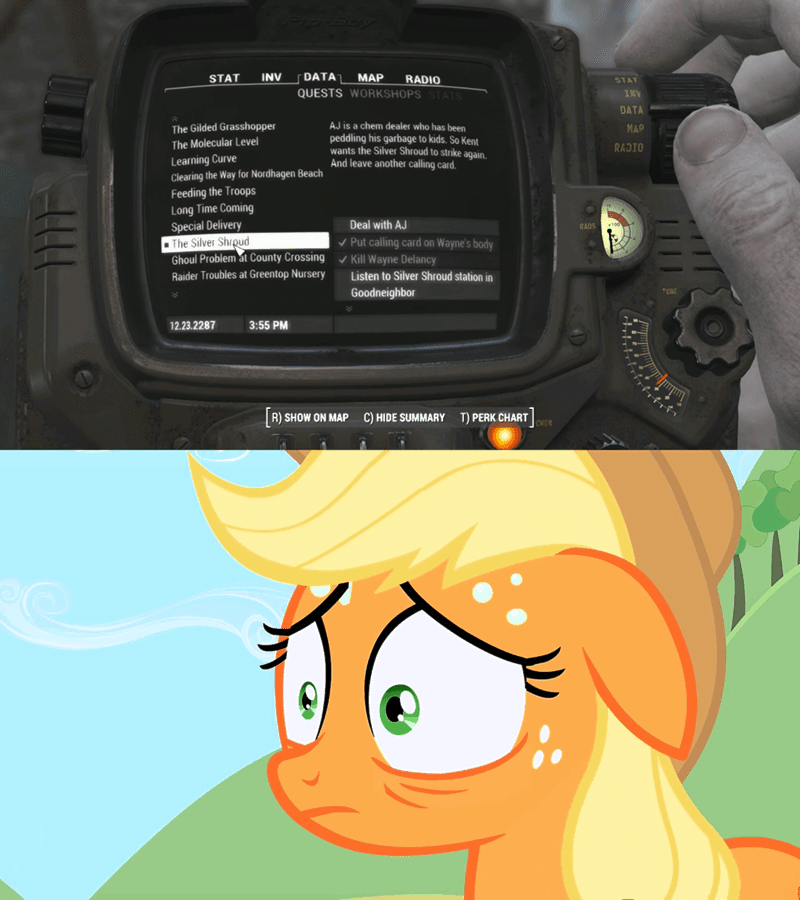 A-ah swear, I only gave them some mentats... 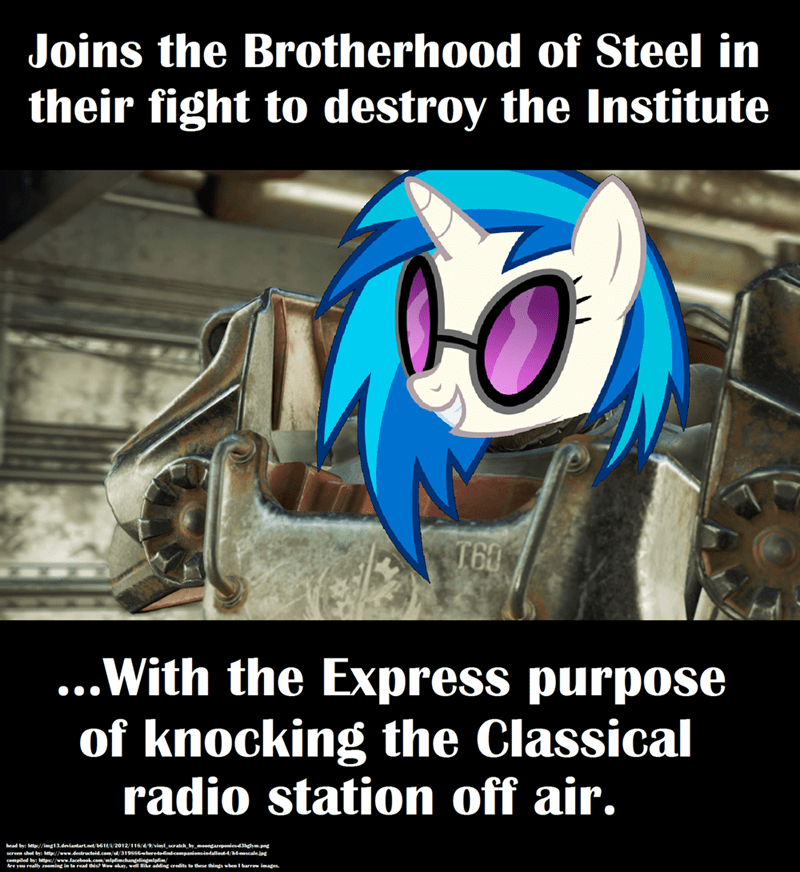 Truly the greatest casualty, knowing this I may have sided with the Institute. 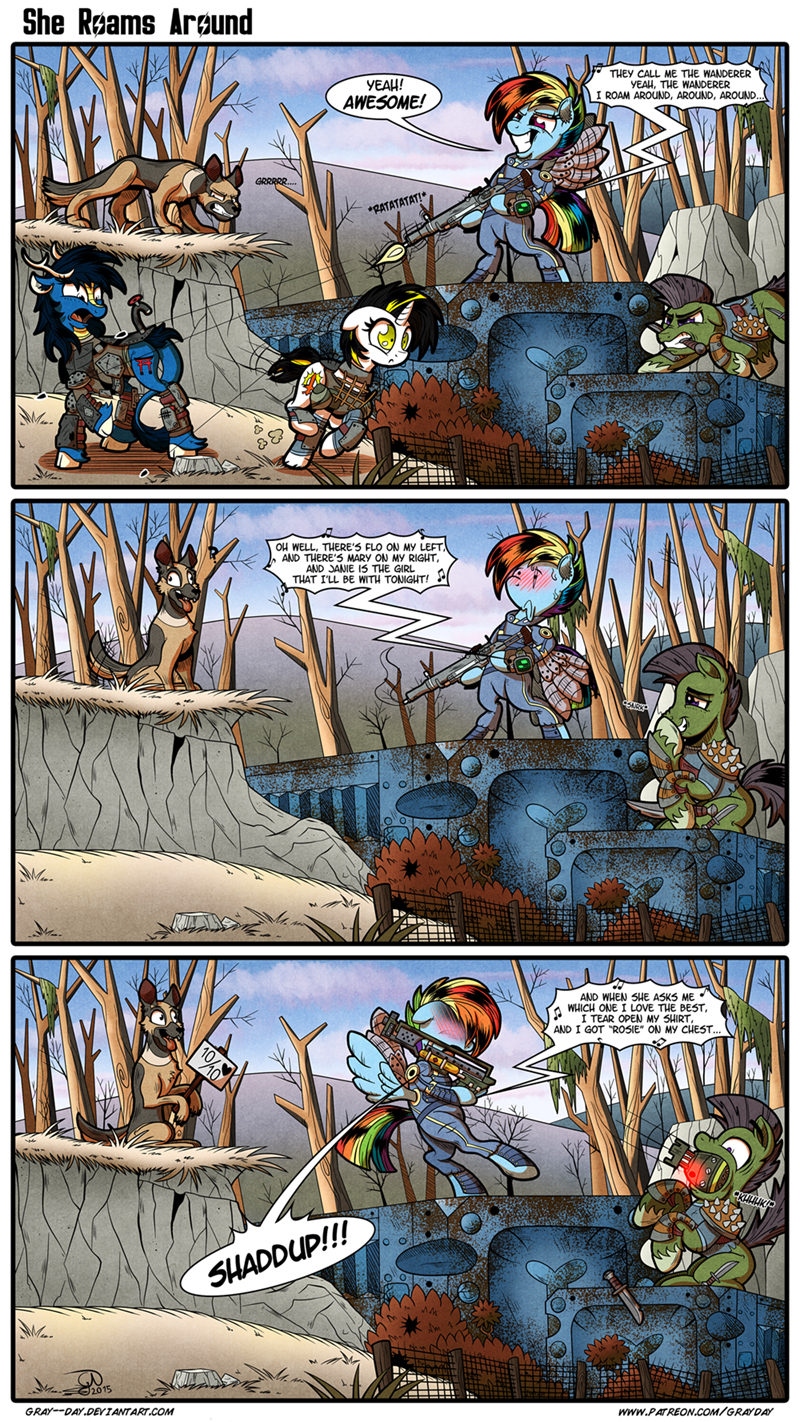 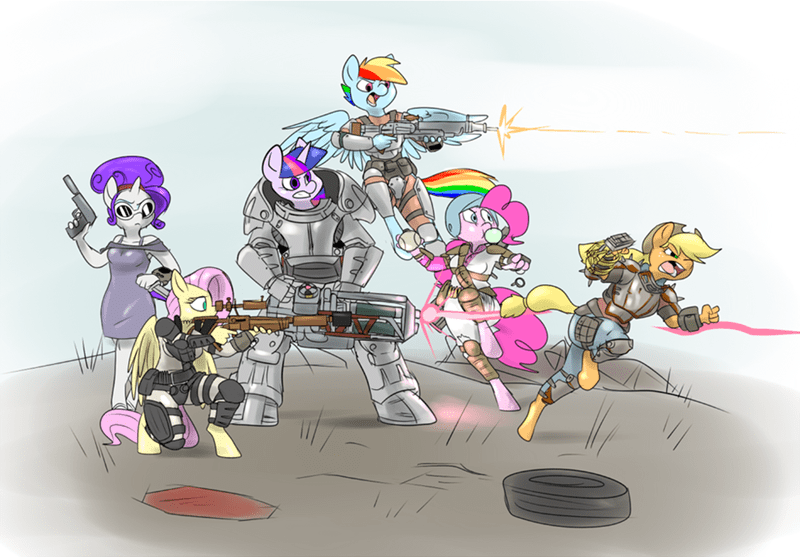 Twilight Sparkle:
The Brains
Twilight's power draws from knowledge. Medicine, chemistry, and technology are her forte, and she mixes and matches these skills to deadly effect. When in safe, peaceful zones, she wears a lab coat as casual attire, and may occasionally pop a mentat for that extra edge (Dr. Mobius seal of approval). When in battle, however, she dons a suit of X-01 power armor, her knowledge allowing her to expand her fusion core's lifespan to near negligibility, and her skills in crafting and dismantling allowing her better and ample capability in maintaining and upgrading it. Her medical knowledge lets her heal wounds and radiation with great efficiency, and her knowledge of chemistry lets her boost the effectiveness of chems over twice their normal power, and when pushed to her limit she summons extreme rage to slow time and pummel her enemies to nothing.

Pinkie Pie:
The Manic
An explosive in and of her own right, Pinkie is a ball of energy who loves to fight like she likes to live; loud and noisy. With a focus on heavy weapons (miniguns, missile launchers) and explosives, Pinkie Pie leaves a trail of destruction in her wake. If she has to get up close and personal, she enjoys the ever subtle Super Sledge (a rocket-powered hammer) and when she's feeling weak, she just eats whatever food she has without fear of radiation; after all, a stimpak doesn't taste good! (Believe her, she's tried one!) Pinkie may or may not frequently make use of power armor, but if she has it it's most likely painted Hot Pink.

Rainbow "Danger" Dash:
The Bruiser
Boisterous and eager to fight, Dash likes to run in guns blazing - especially if those guns are fully automatic. She likes to hit hard and hit fast, often throwing caution and ammo efficiency to the wind, though she isn't skill-less and will aim her shots. When it comes to armor, she likes to have a descent amount of protection, as well as some level of mobility. When forced into melee, she favors faster melee weapons like bats and tire irons over larger, more burdensome tools.

Applejack:
The Muscle
Similar to Rainbow Dash, Applejack gets into the thick of battle, but unlike Dash she's more focused on getting close enough to see the fear in her enemies' eyes. Shotguns and unarmed combat are where she shines, able to trade blows even with power armored enemies, with a strong arm to boost her power, and strong skin to withstand the punishment in turn. The only time she deems to use power armor is if it's a foe too big for her to handle without it (such as Death Claws or Super Mutant Behemoths).

Rarity:
The Infiltrator
Subterfuge, assassination, and manipulation are Rarity's Modus Operandi, and she excels at it dangerously. She can move as a shadow through entire gangs of raiders, cutting them down brutally and, preferably, quietly. She favors the use of suppressed guns to deal with her targets, unless she is confident enough that she can kill them just as quick (and just as unnoticed) with a knife. She also has much in the way of utility, able to hack any computer, pick any lock, and sway any mind to her way of thinking with her charisma.

Fluttershy:
The Stare
A mix of attention and the potential to be harmed makes Fluttershy shy away from direct conflict in favor of dealing with enemies at a range. Stealth is her main focus, getting through obstacles without anyone knowing she was ever there, and eliminating any unavoidable casualties too fast for them to react. She seldom stays in one spot, taking a shot then moving when she can to avoid being caught. With deadly precision and deadlier eyes, Fluttershy is ready to take on the world; as long as the world doesn't get too close.

Where to Find the MLP Easter Egg in Fallout 4

"Abeille" is the french word for "bee" 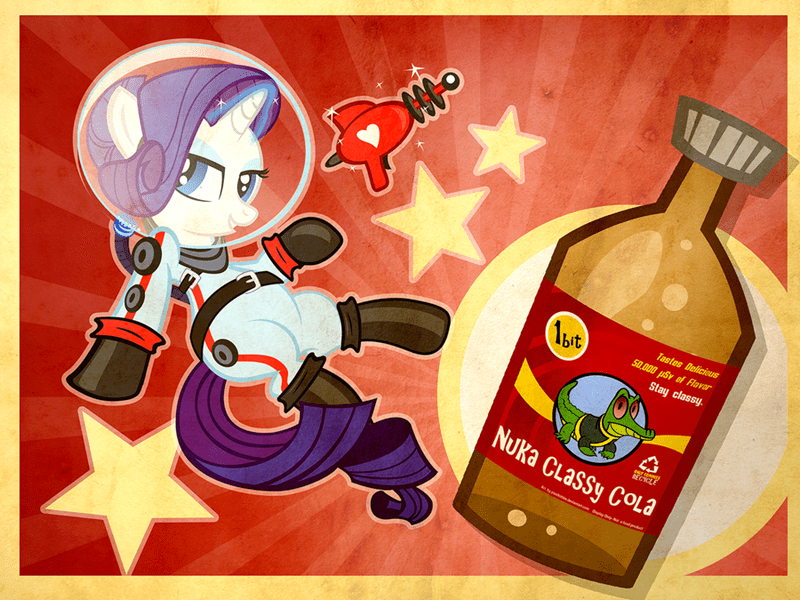 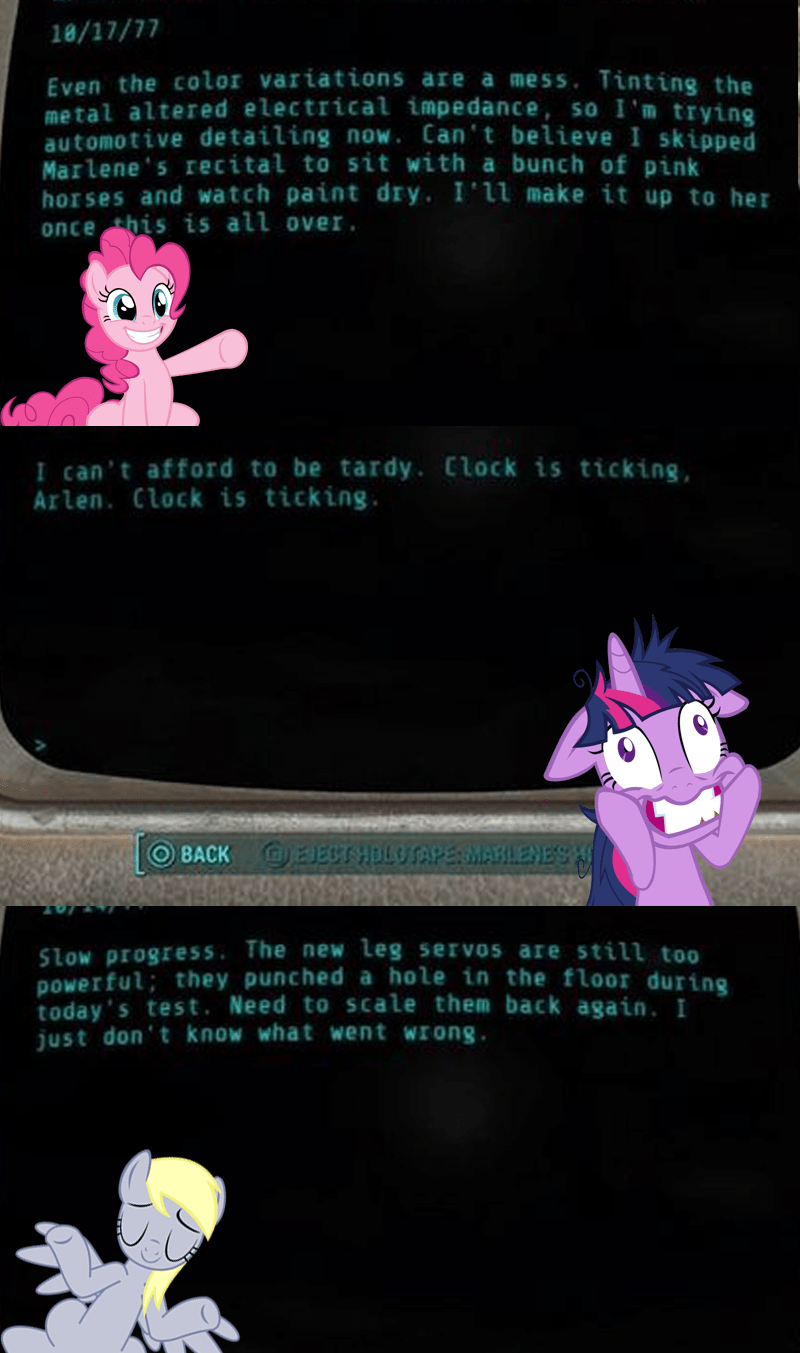 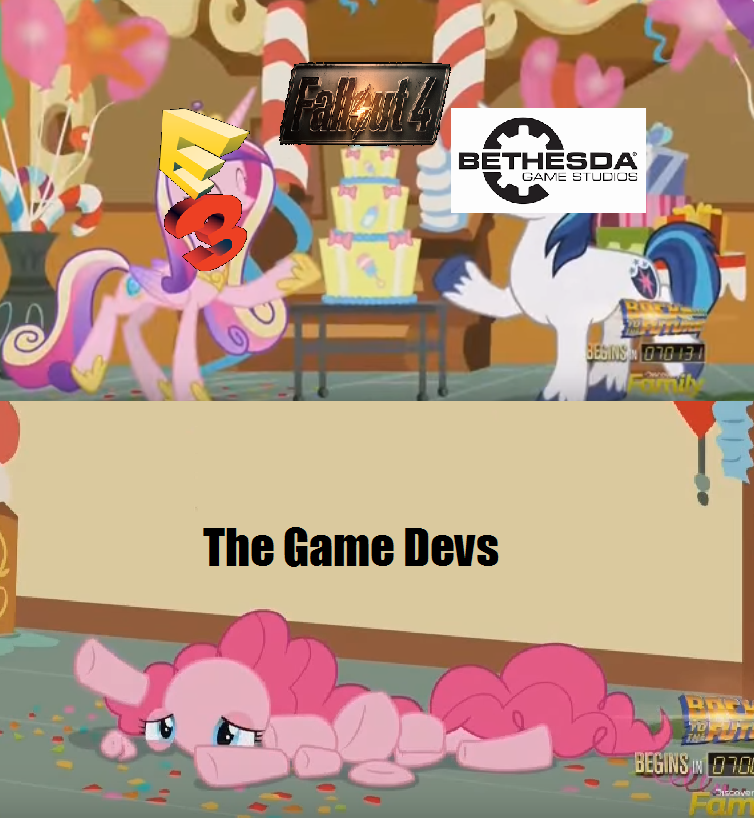 Room For One More? 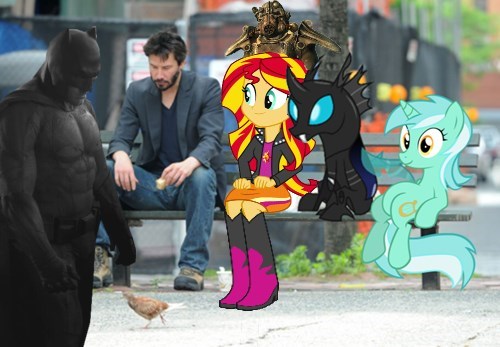