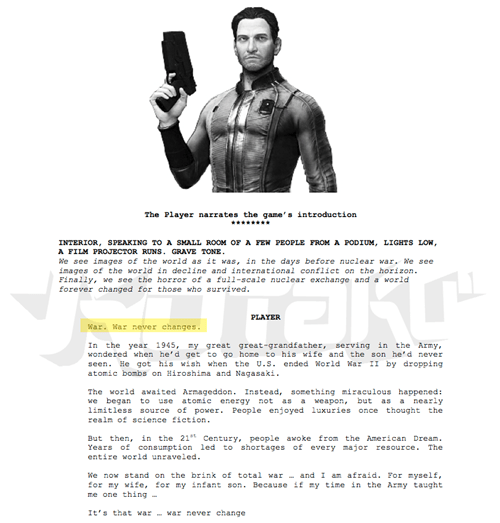 Two weeks ago, a Kotaku reader sent me several documents from a casting call for a project code-named Institute. The casting documents, which I've been able to confirm are real, include scripts, character descriptions, and other details about the next Fallout, and although the word Fallout does not appear in these scripts, there are several references to Fallout's setting and locations.

One character in the documents—who, again, may not show up in the actual game—is named Preston Garvey. One script describes a mission in which Garvey sends you to salvage a fusion core from a museum in the Commonwealth.

The casting documents describe some of the other characters in the next Fallout's wasteland, like a radio DJ named Travis Miles and an engineer named Sturges who is described as "a cross between Buddy Holly and Vin Diesel." Casting calls for both the male and female versions of the player character note that the player begins the game in a cryogenic sleep chamber.

The script obtained by Kotaku suggests the game is to be set in Boston, with references to MIT and The Commonwealth. See more of the leaked documents here.