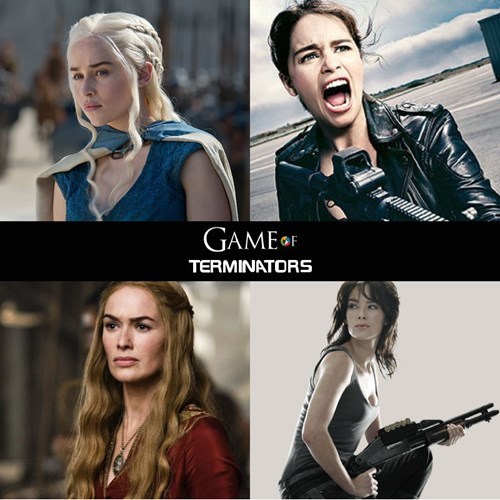 Arnold is Back In ‘Terminator Genisys’

A few days after the release of that face melting animated poster, the first official trailer for the new Terminator reboot is here.
And guess which 67-year-old, former governor of California is back as T-800 with his signature catchphrase?
Here's a plot summary from EW's first look at the film back in October:

[The film] is set in 2029, when the Future War is raging and a group of human rebels has the evil artificial-intelligence system Skynet on the ropes. John Connor (Dawn of the Planet of the Apes' Jason Clarke) is the leader of the resistance, and Kyle Reese (Divergent's Jai Courtney) is his loyal soldier, raised in the ruins of post apocalyptic California. As in the original film, Connor sends Reese back to 1984 to save Connor's mother, Sarah (Game of Thrones' Emilia Clarke), from a Terminator programmed to kill her so that she won't ever give birth to John. But what Reese finds on the other side is nothing like he expected.

It's a Bit Early for the Big Game, But Check Out Terminator Genisys' Super Bowl Ad

Someone Gloriously Photoshopped Uraraka Hugging Into Other Pictures