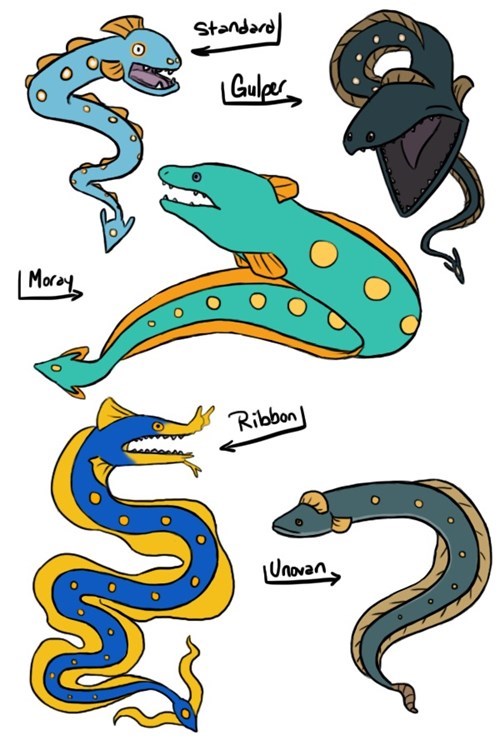 By Doisy (Via meta-akira)
Repost
Recaption

Standard- The most common subspecies of Huntail, it is able to swim in various depths of the ocean. It has adapted to diving deep into the sea by developing bioluminescence in its tail and spots. Its tail resembles a small fish to draw prey closer.


Gulper- The only other Huntail subspecies to develop bioluminescence, this subspecies is rarely seen and little is known about it because it never leaves the deepest depths of the sea. (Based on the Gulper/Pelican Eel)

Moray- The largest subspecies of Huntail, this species lives in lagoons and reefs. It has a vicious bite, and can be aggressive towards humans. Despite their demeanor, they are prized as battlers. (Based on the Giant Moray Eel)

Ribbon- Closely related to the Moray subspecies, this slender subspecies makes its home in reefs. Because of its beauty, it is prized in contests. Trainers should note that as they age, the males change sex and become females. (Based on the Ribbon Moray Eel)

Unovan- One of the few freshwater subspecies, this species has adapted to live in Unova's rivers and lakes, and its tail has changed to resemble a wriggling worm. Its teeth are much smaller than other subspecies, but it is a very strong swimmer. It sometimes ventures into the ocean to mate. (Based on the American Eel)

She Didn't Have to Kill All Those Aliens

Achievement We Don't Have, but the One We Deserve