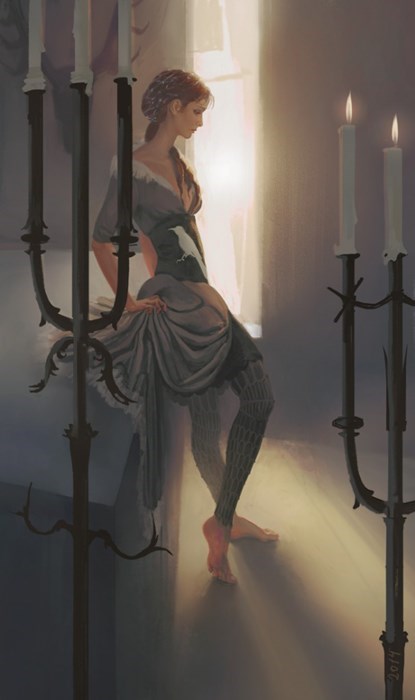 A new sample chapter for the next novel in the Game of Thrones series has been released, and it's from the perspective of Alayne.  In the books, we last left Alayne plotting to retake Winterfell with Petyr Baelish.  He intends to marry Alayne off to the next heir of the Eyrie, Harrold Hardyng, before revealing her true identity and retaking her birthright.  The chapter GRRM has released picks up with Harrold (Harry) arriving for a tournament designed to appoint a kingsguard for Lord Robert.

Here are the first few lines:

She was reading her little lord a tale of the Winged Knight when Mya Stone came knocking on the door of his bedchamber, clad in boots and riding leathers and smelling strongly of the stable. Mya had straw in her hair and a scowl on her face. That scowl comes of having Mychel Redfort near, Alayne knew.

“Your lordship,” Mya informed Lord Robert, “Lady Waynwood’s banners have been seen an hour down the road. She will be here soon, with your cousin Harry. Will you want to greet them?”

Why did she have to mention Harry? Alayne thought. We will never get Sweetrobin out of bed now. The boy slapped a pillow. “Send them away. I never asked them here.”

Mya looked nonplussed. No one in the Vale was better at handling a mule, but lordlings were another matter. “They were invited,” she said uncertainly, “for the tourney. I don’t… “

Alayne closed her book.  “Thank you, Mya. Let me talk with Lord Robert, if you would.” Relief plain on her face, Mya fled without another word.

“I hate that Harry,” Sweetrobin said when she was gone. “He calls me cousin, but he’s just waiting for me to die so he can take the Eyrie. He thinks I don’t know, but I do.

If you want to keep reading, the rest of the exerpt is available here.
Comments

I Choose You, Hitmonlee!